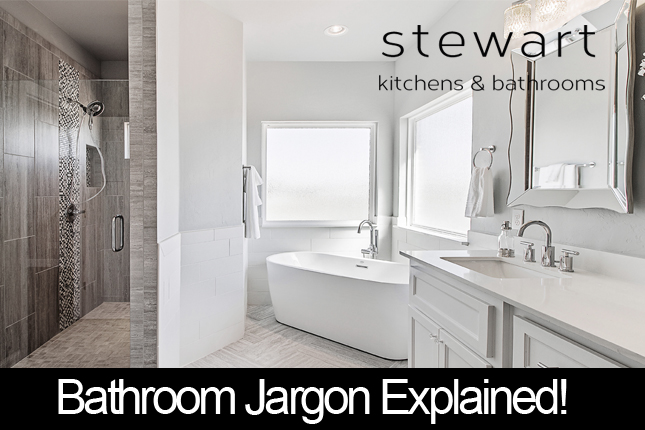 As promised, this month I am unravelling bathroom jargon for you. Here are some of the more commonly used words and phrases, together with a brief explanation:

• Back-to wall – this is a toilet or bidet that has been fixed directly to the wall with the pipework or cistern concealed behind the wall.
• Bar – the unit water pressure is measured in.
• Bottle trap – this sits under a basin holding water as a barrier to gasses coming back through the pipes.
• Close coupled WC – a toilet with the cistern directly behind the pan. Usually controlled with a push button.
• Mixer shower – a shower that mixes hot and cold water in a valve before it reaches the shower head.
• Mono-block mixer tap – a single tap mixing water from both the hot and cold supplies.
• Pedestal basin – a sink sitting on top of a column or pedestal.
• Pillar taps – traditional separate hot and cold taps.
• Pop-up waste – with this type of plughole the plug cover lifts out via a lever connected to the back of the tap.
• Rainforest shower – this type of shower has a large head spreading water over a wide area.
• Snagging – a term used to describe any items or issues outstanding at the end of a job. The client will usually compile a list which the workman will complete to formally finish the job.
• Thermostatic shower – a mixer shower with pre-set thermostat that detects changes in water temperature to adjust it accordingly.
• Vanity unit – comprising a cupboard or shelved unit under a basin.